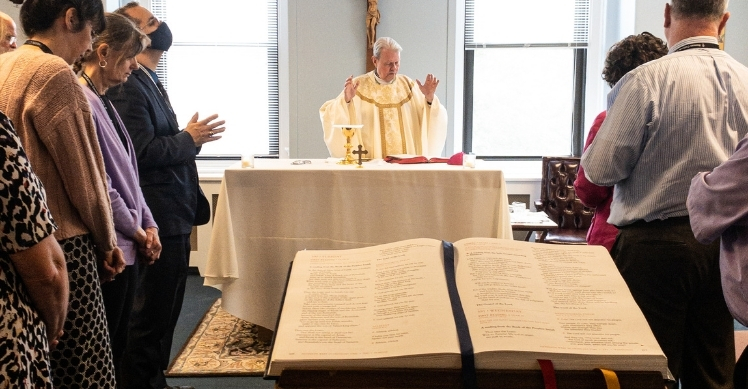 "Lord, make me a channel of your peace."

The Most Rev. Edward B. Scharfenberger was born May 29, 1948, in Brooklyn, N.Y. He attended Catholic schools and graduated in 1969 with a degree in English from Cathedral College of the Immaculate Conception in Douglaston, N.Y. He went on to study at North American College in Rome and earned a bachelor's degree in sacred theology from Pontifical Gregorian University in 1972. He was ordained a priest of the Roman Catholic Diocese of Brooklyn on July 2, 1973, in St. Peter’s Basilica by then-Bishop James A. Hickey, who later became Cardinal-Archbishop of Washington, D.C.

Bishop Scharfenberger served as parochial vicar at St. Stanislaus Parish in Maspeth (Queens) and St. Ephrem Parish in Dyker Heights (Kings) before returning to Rome to continue his studies. He earned a licentiate in sacred theology from the Academy of St. Alphonsus in 1977, a licentiate in Canon Law from Catholic University of America in 1980, a Juris Doctor of Law degree from Fordham University in 1990, and was admitted to the New York State Bar in 1991. He was named a Prelate of Honor (monsignor) in 1995.

Bishop Scharfenberger served as Judicial Vicar for the Roman Catholic Diocese of Brooklyn from 1993 to 2002 and as pastor of St. Matthias Church in Ridgewood (Queens) from 2003 to 2014. While serving as pastor of St. Matthias, he also taught moral theology at the Diocesan Pastoral Institute in Brooklyn and was an adjunct professor at St. Joseph’s College, also in Brooklyn. He also served as Promoter of Justice for the Brooklyn Diocese and was a member of the Diocesan Review Board for Sexual Abuse of Minors; as Vicar for Strategic Planning; and as Episcopal Vicar for the borough of Queens.

On February 11, 2014, he was named by Pope Francis as the tenth Bishop of the Roman Catholic Diocese of Albany, succeeding the Most Rev. Howard J. Hubbard. He was ordained to the episcopacy on April 10, 2014, at the Cathedral of the Immaculate Conception in Albany by Cardinal Timothy Dolan, Archbishop of New York. For his Episcopal Motto, Bishop Scharfenberger chose a line from the Prayer of St. Francis: “Lord, make me a channel of your peace.”

In his six years as Bishop of Albany, Bishop Scharfenberger has been a national leader in responding to the clergy abuse crisis. He published a list of offenders in the diocese in 2015, was among the first bishops in the country to call for an independent lay-led investigation of the scandal involving former Cardinal Theodore McCarrick, revamped the diocesan review board, and established a predominantly lay task force on sexual abuse last year to make recommendations to the diocese on its response to survivors and its internal policies.

Bishop Scharfenberger serves as a Consultor to the Pontifical Commission for Religious Relations with the Jews. He also serves on the following committees and councils of the United States Conference of Catholic Bishops: National Advisory Council, Ecumenical and Interreligious Affairs, Administrative Committee, Committee on Priorities and Plans, and Subcommittee on the Church Africa. 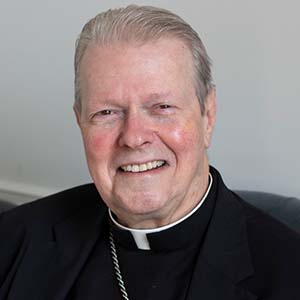 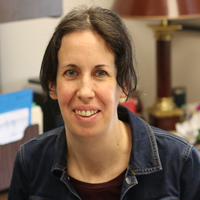