The Tribunal is the official external agency, which, after the fashion of a legal court, decides any judicial conflicts within the Roman Catholic Church.  In recent years, the Diocesan Tribunal has dealt primarily with the canonical aspects of marriage on two levels: namely, pre-marriage dispensations and permissions, and with marriage failure.

The Tribunal has the judicial power to review and decide all cases of marriage alleged null and void, and to conduct all other judicial processes under the laws of the Catholic Church, as vested in the Judicial Vicar of the Diocese, who constitutes but one tribunal with the Diocesan Bishop.

All correspondence should be addressed to the Father Matthew H. Frisoni, STL, JCL, Judicial Vicar, whether by mail, e-mail or telephone.  All inquiries concerning the status of a marriage nullity case should be directed to Mrs. Anne Schmidt.

Defender of the Bond 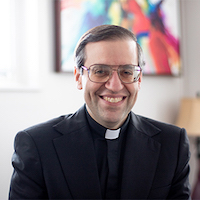