Seminary Life in the Eternal City

Matt Duclos is a diocesan seminarian attending the North American College in Rome. He agreed to do an Instagram "takeover" for us to offer a visual taste of the life of a seminarian in the Eternal City. 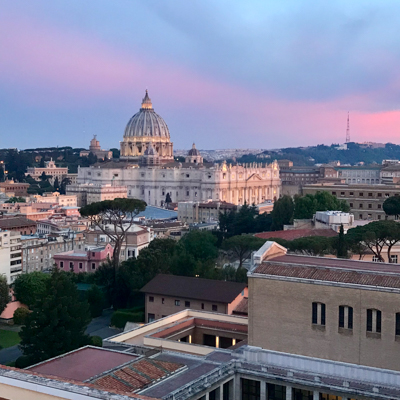 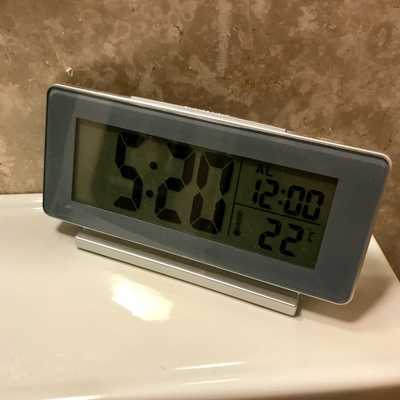 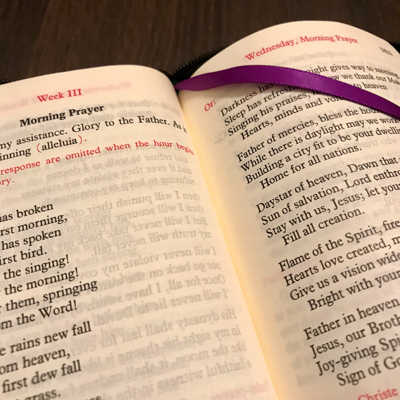 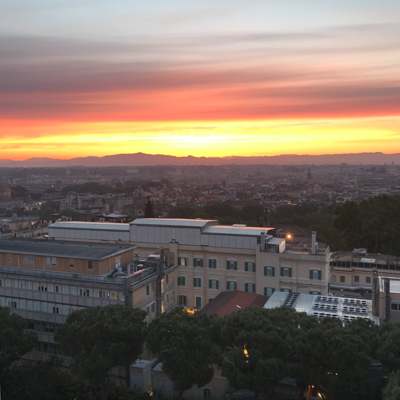 Good morning, Instagram! My name is Matt Duclos, and I'm a semianrian in my second year of theology studying in Rome. Today I'll be posting about "a day in the life" of a seminarian over here.

Weekdays usually begin with Morning Prayer and Mass in the chapel at 6:15am, followed by breakfast. We can't use our phones in chapel or refectory (the dining hall), so no pictures from there, but I did run up to the roof to get a couple of the sunrise! (Not my usual routine, but it looked beautiful this morning!) Looking forward to sharing the day with you....more later! -Matt 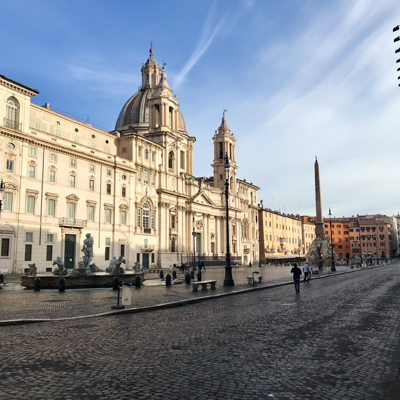 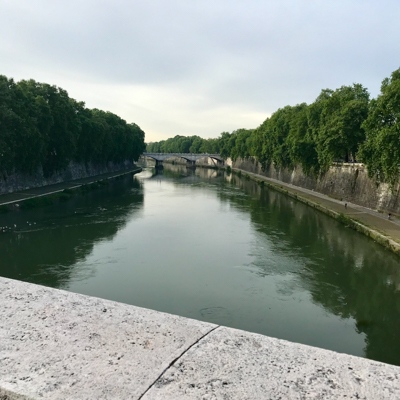 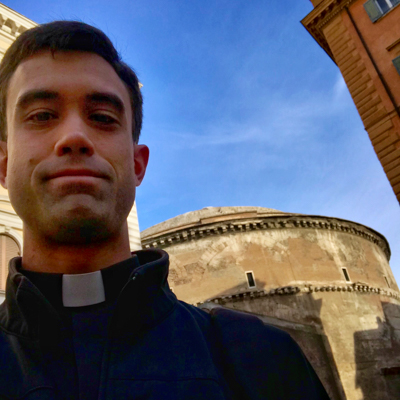 After Morning Prayer and Mass, we have breakfast (there’s always French toast on Wednesdays) in the refectory and then depart for class. It takes about a half hour to walk to the Gregorian University, just a couple blocks away from the Trevi Fountain. The route takes me across the Tiber River, by Piazza Navona, and behind the Pantheon, all before the tourists start to wake up! I usually arrive at school around 8:00am. Today we have four hours of class beginning at 8:30am (45 minutes of lecture and a 15 minute break): two hours of Canon Law, one hour of Prophets, and one hour of Sacraments II.

I am in what’s known as the “STB” program, Bachelors in Sacred Theology. This is my second year of this three-year program. The Gregorian is one of three universities in the city used by Americans for the STB, and all of my classes are in Italian! There are about 120 people in my classes (seminarians, sisters, and lay people) who are from literally all over the world.

Many seminarians who study in Rome stay for a 4th and 5th year in the “STL” program, Licentiate in Sacred Theology, which is a more specialized degree in one particular field (canon law, scripture, morals, history, music, liturgy, etc.) that gives them the license to teach in a university or seminary.

Here are a few shots from the daily walk to school. It’s relatively quiet on the streets at 7:45 in the morning! 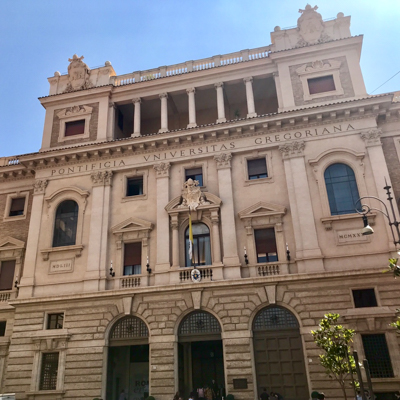 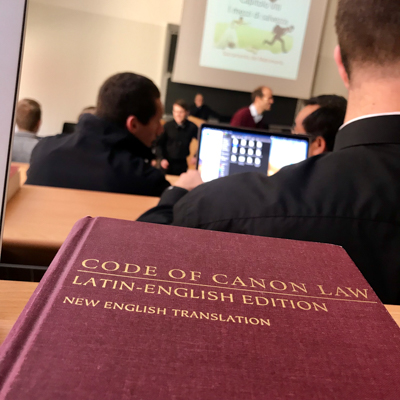 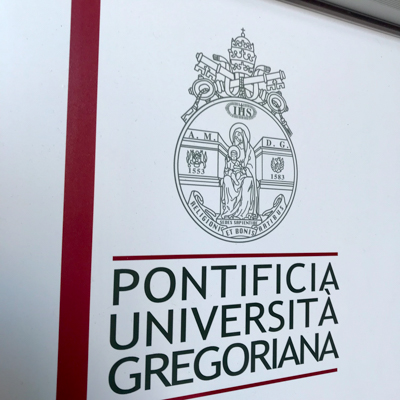 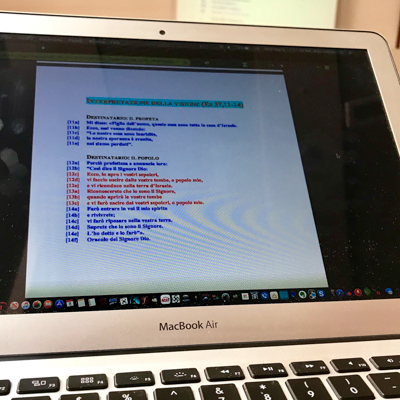 12:15pm here = 6:15am there, we’re done with morning classes while many across the ocean are just getting moving!

Here are a couple shots from my perspective in class. Today in Canon Law, we finished talking about the sacrament of Holy Orders and started the section about marriage. In our prophets class, we talked about the prophet Ezekiel and discussed chapters 35-37, and continued a discussion on scriptural references to marriage in Sacraments II.

I mentioned that classes are all in Italian. When I arrived in Rome in July of 2017, I started with a month language study in Assisi, then another month in Rome, and then I’ve continued with an Italian tutor once a week since then. After listening to Italian every day in class, I’m comfortable with listening and understanding it (at least most of it), and my conversation skills continue to develop. The Americans in our class have a system set up to take English notes of each lecture. Our last day of class this semester is Thursday, May 30, and then we begin a couple weeks of final exams. Each class has a 15-minute oral exam (can be done in English) and that exam determines our grade for the entire course.

After classes are over, it’s the half hour walk from the university back to the seminary for lunch (“pranzo”). This is the main meal of the day from 1:15-2:00pm. Every pranzo includes a salad course, a pasta course, then meat or fish with vegetables, and it ends with fruit or gelato. It’s family-style with guys serving as waiters for each table. Again, no phones in the refectory, so I’ll let you know later what we had to eat! -Matt 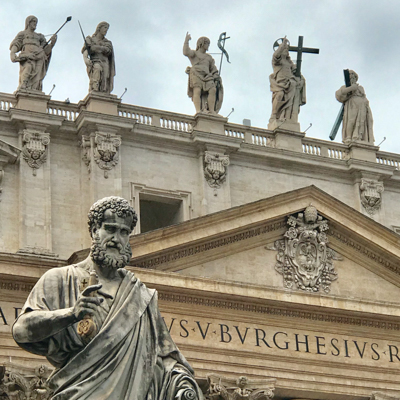 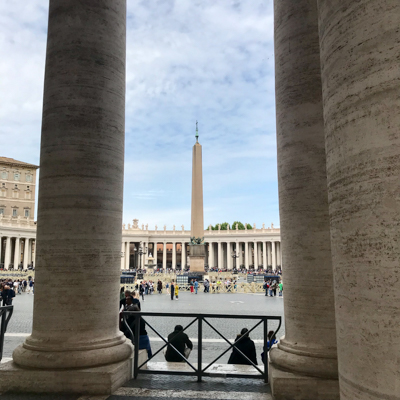 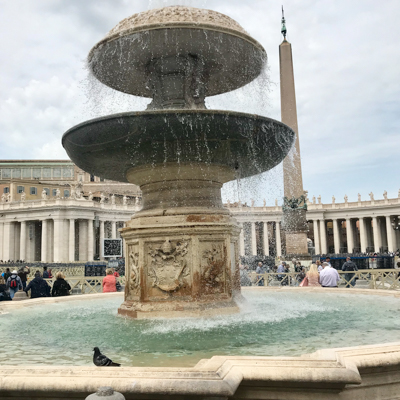 Lunch was amatriciana pasta (tomato sauce with bacon, delicious) and chicken and potatoes with fruit. Buffet style today because we have the fancy tables set up for the Rector’s Dinner tomorrow night, the annual fundraiser here.

After lunch, I head right to my apostolate at St. Peter’s Basilica. Each of the seminarians here is assigned to an “apostolate,” which is a work of service somewhere in the city. Some guys teach religious education classes at parishes, some minister in a local prison, some visit the elderly in their homes, some answer questions and evangelize in St. Peter’s square, and some minister to college students who are in study abroad programs.

My apostolate is twofold: one part is to give tours of St. Peter’s Basilica and the other part is to work at the Visitor’s Office, which is run by the United States Conference of Catholic Bishops and distributes tickets to papal events such as the weekly Wednesday audiences and papal Masses. Today, I’m scheduled to give a tour of the Basilica and I’ll wait for people at the statue of St. Peter at 2:15pm (a 10-minute walk from the seminary) and see who arrives! Since this particular tour is free and you don’t need a ticket or reservation, I never know who will show up. But it’s always great to meet people from all over the country who are visiting Rome and interested in learning more about St. Peter himself and the Basilica. Depending how long it takes to get through the security line, the tour should wrap up in a couple hours. -Matt 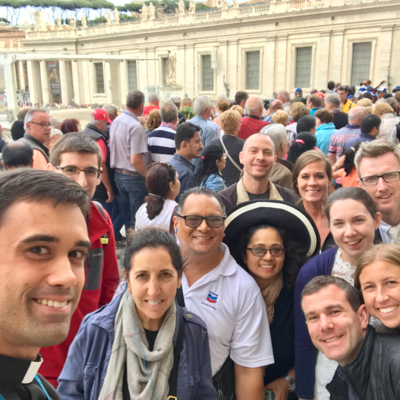 Today’s tour group at St. Peter’s! They were from California, Chicago, Michigan, and Ireland, including a couple that was just married a week and a half ago! Always good to welcome people over here, especially if it’s their first time in Rome and inside the Basilica. (They gave me permission to take their picture!) 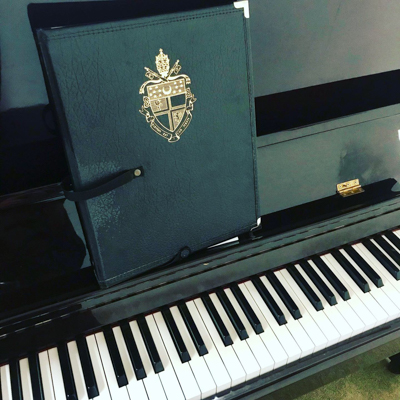 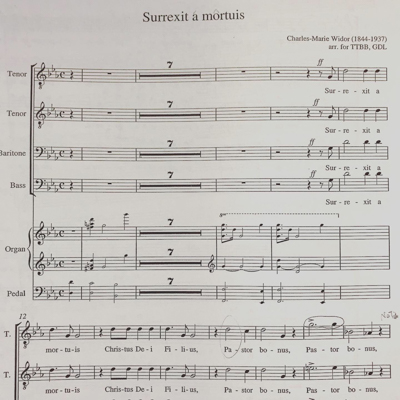 I have choir rehearsal on Wednesday nights. The choir rehearses to sing at the Sunday Mass and one of my responsibilities as organist is to play piano for the weekly rehearsals.

A little bit of background: I graduated from Shenendehowa in 2008, received a degree in Music Education from the Crane School of Music at SUNY Potsdam in 2012, then taught over a period of 2 years at Scotia-Glenville, Voorheesville, and Tamarac school districts. Simultaneously, I was working as Director of Music at Corpus Christi Church in Round Lake. After my name was submitted in the “Called By Name” program in 2012, I began considering the priesthood and started attending vocation events. My pastor at the time, Fr. Jim Clark, was a great mentor for me at Corpus Christi and hired me to work there full time in 2014. I resigned from my job at school and began work at the church just before he was diagnosed with cancer and began chemotherapy. After a struggle, partial recovery, and another struggle, he died in October of 2015. I continued there until 2016 when I began seminary at Cathedral Seminary House of Formation in Douglaston, Queens for a year, taking philosophy classes at St. John’s University, and now I’ve been at the Pontifical North American College in Rome since the summer of 2017.

All that to say: God has used music to keep me connected to the Church throughout my life. Starting with piano lessons in 4th grade, playing piano for St. Mary’s, Crescent in middle school and high school, playing organ for two parishes in Potsdam throughout college, my job at Corpus Christi, and now continuing as organist here at the seminary….that’s been the constant. Music brought me to Corpus Christi, which opened me up to the idea of priesthood, which initiated a deeper prayer life and now here we are! It’s incredible what happens when you’re open to God’s plan. This is CERTAINLY not the life I had planned for myself, not the country I imagined living in, not the language I imagined speaking, not the people I imagined meeting….but that’s comforting, in a way. I could never have planned this for myself, so I thank God for leading me here and I’m open to what the future has in store. -Matt 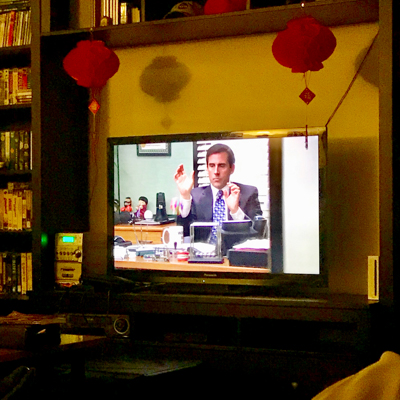 After a busy day of classes, my apostolate, and choir rehearsal, I always look forward to my hall’s Wednesday night tradition of watching a couple episodes of The Office in our lounge. We’ve been making our way through the series and today we’re watching “The Duel,” season 5 episode 12.

I’m one of two seminarians here from the Diocese of Albany. Stephen Yusko, from Hudson, is also in 2nd Theology here. Opportunities like these Wednesday night gatherings are good for relaxing with a mix of people from all over. There are about 220 seminarians here from dioceses across the country.

If you’re still following along, thank you! I think there will be one more post at the end of the day. -Matt 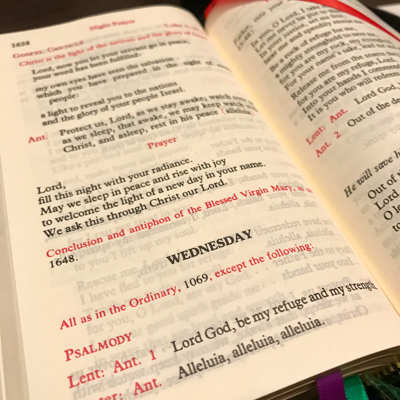 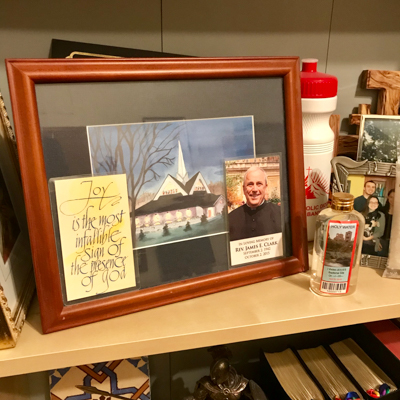 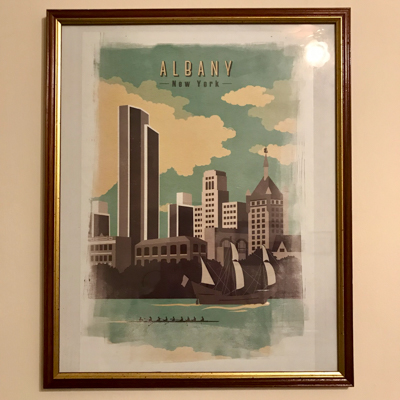 These posts are a brief glimpse into what one day looks like. What they don’t show are the many other joys, struggles, challenges, blessings, questions, and conversations that have happened each day for the past two years. The surprise of being sent to Italy for seminary is both a challenge and a blessing. Being away from home for holidays, major events (my twin sisters are graduating college in May), births (my other sister and her husband had their first child who is just about 5 months old!), deaths, events….it’s not easy. Yet, the unexpected, incredible experiences I’ve had balance it out, in a way. Meeting Pope Francis on Christmas Eve last year, traveling all around Europe, meeting people from all over the country and the world, learning more about myself, about God, and about my role in God’s plan.

At the beginning of this whole Italian experience, I was intentional about bringing Albany along with me. Me being over here is not just for me, it’s for everyone in the Diocese. I’m supported in many ways by all of you. Financially, yes, but more importantly through your spiritual support of prayers, encouragement, cards, visits….all of that is crucial to maintain a connection to home.

I’ll use this final post to thank God for this opportunity, this chapter in life, and the strength to continue day by day. And I’ll thank all of you for your continued prayers and support for me and all the seminarians. It’s through interactions with you and support from you that will make us good priests in the future.

My flight home is on Friday, June 14 (first time home in two years!), just in time for the ordination of three great guys to the priesthood at the Cathedral on the Saturday, the 15th. Please pray for them and thank God for their ‘yes’ to the priesthood.

Signing off for now…keep in touch…and let’s pray for each other.